I hope these few lines will find you all well as this leaves me at present, thank God. I came down South last May 78 I like it first rate the climate is very nice down here. Work is getting so scarce that I have to shift from one place to the other. I would like to go home but I can see by the papers that times are harder in the old country.

Dear father I am sending you four pounds or twenty dollars. you can write to Mary if you have received it. I have just received the letters that you wrote this month I see there is a big lot of growling at home. If they took my advice they would stop that and tell them in plain english that they are better off at home than in America or Australia.

when I was in California I had to carry my blankets on my back if you would not get work would would then have to sleep out doors. It is the same in Australia in all those new countries. I suppose you give them a little pocket money once in a while not to be as tight as you were with me.

I hope mother is in good health she spoke about a shawl, I might be able to send her a shawl or the price of it after a while. I see that Con is not for this world I think when his eyes were well that he had a right to take care of them. I expected that Eugene was in Australia before this time but I think if he was to mind himself at home he would be much better off. I see that timothy is following the sample of Eugene. If they were in a foreign country they would not have such a soft time of it.

I hope to go to Ireland after a year or two I will be able to say more about the latter part of this summer. I must conclude for the present wishing you all good health.

I remain your affectionate son.

P.S. If you should direct a letter at me you can address it Andrew Moynihan for I have changed my name. This time you can write the same way that I have written it. 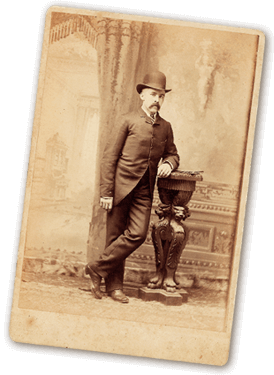 This website uses cookies to improve your experience while you navigate through the website. Out of these, the cookies that are categorized as necessary are stored on your browser as they are essential for the working of basic functionalities of the website. We also use third-party cookies that help us analyze and understand how you use this website. These cookies will be stored in your browser only with your consent. You also have the option to opt-out of these cookies. But opting out of some of these cookies may affect your browsing experience.
Necessary Always Enabled
Necessary cookies are absolutely essential for the website to function properly. This category only includes cookies that ensures basic functionalities and security features of the website. These cookies do not store any personal information.
Non-necessary
Any cookies that may not be particularly necessary for the website to function and is used specifically to collect user personal data via analytics, ads, other embedded contents are termed as non-necessary cookies. It is mandatory to procure user consent prior to running these cookies on your website.
SAVE & ACCEPT
×